Enter the World of Magical Inventions in Wild Machine by Pragmatic 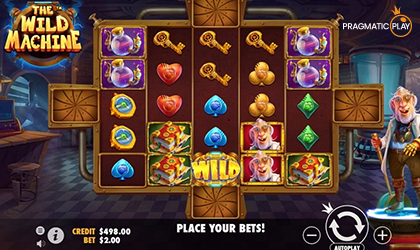 Pragmatic Play, one of the most prominent software providers in the iGaming industry, has announced the release of a new slot titled Wild Machine.

The new game features a mysterious theme and enough potential to turn someone’s day for the better in a single spin!

The supplier has covered a vast array of themes so far, however, the one in this latest release has got to be among the most original ones. Namely, the whole thing takes place in what appears to be an underground laboratory belonging to a mad scientist. The team went the whole 9 yards with the graphics on this one.

As the game loads up, players are introduced to the professor who is hovering ominously off to the right of the reels. Behind him and all around the reels is his lab most of which is animated. The flickering light above a computer terminal and the electrifying vat of unknown liquid in the back add to the immersive value of the game.

All of this is paired with an eerie soundtrack to create a very unique experience. As far as the symbols go, they are represented in the two tiers. The lower-paying tier features card suits while the higher-paying symbol comes in the form of various books, watches, and potions from the lab.

The game starts off as a 5x5 slot that runs on 40 paylines. However, the reels can change to a rhombus configuration randomly at any point in the base game, where reels 1, 4 and 7 are guaranteed to land full wild symbols.

Other special features include…

…the wonder wheel feature that is triggered by landing 3 scatters. Once activated, a wheel appears on the screens with 30 slices. Each slice carries a unique award. Lastly, there are 2 types of bonus spin modes, including the Gold Foundry Bonus Spins and Diamond Forge Bonus Spins.

Melissa Summerfield, Chief Commercial Officer at Pragmatic, said: “The Wild Machine is an exhilarating new addition to the Pragmatic Play portfolio. With its quirky theme and fun gameplay, combined with random-trigger features and a lucrative bonus round, The Wild Machine will be manufacturing fantastic Pragmatic Play slot experiences for fans worldwide.”

Pragmatic is one of the leading software providers in the iGaming industry. The company has been around for a while, building a reputation of a trusted supplier and a reliable partner. Specialized in building and releasing immersive slot games, Pragmatic has established a decent following among those who appreciate quality games. Aside from games themselves, this company also offers a wide range of tools to its B2B clients.