Enjoy the Ride Through the Italian Countryside in Scopa by Habanero 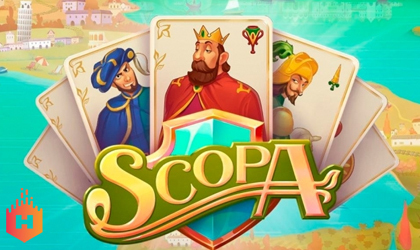 Habanero, a prominent software provider in the iGaming industry, has launched its latest game titled Scopa. Named after a popular Italian card game, the new slot takes players to straight to the prettiest parts of the old continent, offering awesome scenery and interesting features.

The developer has a knack for making highly immersive slots. However, it feels like they’ve outperformed themselves with their latest release.

This new slot game is all about…

…the Italian experience. The game takes place in a train compartment overlooking the beautiful Italian countryside. Players can enjoy the Mediterranean scenery as the reels run across the screen. It’s worth mentioning that the background is animated, which gives the game its immersive value.

Players will absolutely feel like they’re on a moving train. Another thing worth mentioning is the soundtrack. The developer’s creative team has completely nailed the sounds of the Italian countryside.

The symbols are where the game gets its name from. Every symbol represents icons from the Scopa card game, especially in the lower-paying tier.

…shares the same aesthetic but is populated by various characters from the game.

This latest release is interesting in the sense that it features unusual reels. Namely, the first and last reels only have the middle row, while the middle 3 reels have all 3 rows.

Special features come in the form of…

…a bonus spin mode, as well as the Scopa Payout. This feature is triggered once all of the symbols on the screen are winning symbols. Once triggered, Scopa Payout adds a x25 multiplier to the entire bet. Next up are the locations.

Players can visit the cities of Genoa, Milan, Naples, Venice, and Tuscany. In order to unlock new cities, players have to complete the Free Game mode in previous ones starting with Genoa. As new cities are unlocked, the game will offer new and exciting options to players!

Habanero is a software provider and slot game specialist that is known for delivering high-quality slot games to the iGaming industry. With a massive portfolio of games, it has become one of the favorite partners for prominent online casinos. In fact, this company’s distribution network consists of top tier operators from all corners of the world. It has a massive following in Europe where their games are in high demand.

The team behind the brand is made up of highly talented individuals whose sole mission is to bring innovation to the world of slot games. The brand runs a tight ship and is delivering a high number of new titles every year.