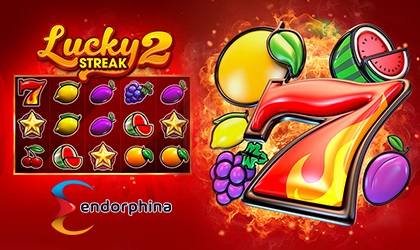 At the speed of light, Endorphina  is climbing to the top of the world with their newest innovations. The last one in line is the Lucky Streak Slot. Let’s talk about it!

Better Than The First?

It seems like not so long ago they released the first part of the Lucky Strike series. And now, they have already launched the sequel called, Lucky Strike 2.

For those of you who know what we are talking about, they can assume that this video slot comes with a classic design. It holds five pay lines and the same number of reels.

When it comes to its appearance, it doesn’t differ too much from the previous one, however, it seems like the colors are dimmer and darker. One thing they surely have in common – both are providing their players with huge amounts of entertainment and joy!

Furthermore, this game is designed mostly for the ones who love simple slots and rules, yet with the same opportunities to score big as with the ones that are more advanced.

It looks like people from Endorphina are eager to keep us all satisfied and happy by developing rewarding and interesting reel slots. Winter is not going be cold with them.

One of Many Successful Partnerships:

As a part of their very fruitful year is another ambitious business move – signing a dealership with Nissi Online casino. They are also one of the most promising companies in this industry, for the time being, however, they wanted to be even stronger with Endorphina’s assistance.

Ever since they opened, they’ve been continuously adding more top-notch games. All of them were highly-praised by the users and public, therefore, they continued doing that by adding the latest products from Endorphina.

Although their games have already established a great reputation, the new ones from the software developer are going to embellish their collection.

New members are constantly arriving on their website due to their broadened assortment of games. Furthermore, if you are interested in doing that too, you can easily set up an account on their website.

Besides the regular things, visitors can also experience various tournaments and bingo games that can often be seen, along with the famous table games (blackjack, roulette  and many more).