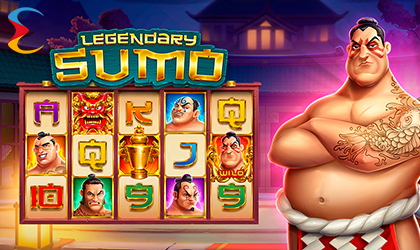 Famous and well-respected Japanese fighting discipline, Sumo wrestling, was a major inspiration for the Legendary Sumo video slot created by Endorphina. In the background, there is a sumo ring, and the game has an immersive soundtrack that makes the overall experience much more realistic. The reels take up the center of the screen and the player options are shown below.

What Can You Expect?

Aside from the stunning design, the new release also has 5 reels, 3 rows, and 21 active paylines. Additionally, players will see here scatters and wild symbols, as well as free games and a risk feature. Wager-wise, players can bet between $0.10 up to $210. Return to player (RTP) is decent and is 96%, which is around the average these days. As with any other slots, players will need matching symbols in order to generate a win and if they get at least 3 symbols they will be rewarded plus with even more matching symbols the prizes will be higher.

Here, the most valuable symbol in the game is a sumo wrestler, also there are classic card symbols and various other sumo wrestlers with different faces and tattoos. As for the special ones such as the wild symbol, it comes with a red dragon mask and will make wild all the symbols on the grid!

More on the Czech-Based Provider:

Endorphina is a well-liked and trusted provider and the company has developed great casino software for over 10 years. The company operates from its headquarters in the Czech Republic in the capital city of Prague and has gained immense popularity over the years thanks to the incredible online slots it has created. It designs state-of-the-art content with great graphics and its added features make it stand out from other providers. For players familiar with the brand’s titles, it's clear that the its key task is to develop the highest quality games filled with striking 3D animations. Also, its titles are supported with HTML5, which enables the games to be played on various devices and platforms. The brand was able to expand its network through its partnership with XIN Gaming, which has helped them grow and expand in Asia and other global markets.