Endorphina To Open The Doors Of The City Of Troy 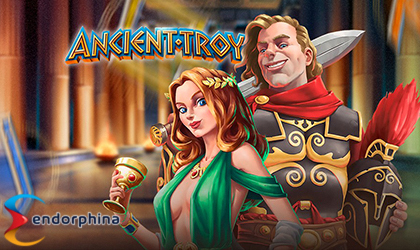 Are you ready to play a game that has such a complicated and intent story that it almost feels like you’re inside an action movie filled with dramatic and breathtaking moments?

These types of video slots are quite rare, therefore, we encourage you try out this one and see if it is your cup of tea.

Endorphina At Its Best!

We can safely say that this is one of the most amazing slots they’ve made so far! Yes, we are talking about Endorphina and their latest release, titled Ancient Troy.

You can assume it was inspired by one of the most popular stories from ancient Greece involving Trojan Horse and Troy.

Furthermore, it perfectly depicts a dire war and ruination that has completely taken over the city of Troy.

More Details About The Game:

The story is set in the realms of an old palace during regular gameplay. Now, when it comes to its free games feature, players are moved into a glorious palace.

History lovers or the ones who are simply fond of ancient Greece will love the fact that the innovative supplier has hand-picked some of the actors from this video slot, with a goal to showcase some of the most recognizable characters from this story, such as Helen of Troy, courageous Hector and Achilles. Hele was often proclaimed to be one of the most beautiful women in the world.

What else do we need to know about its specifics? It comes with five reels twenty-five pay lines and provides players with an additional games feature when more than three scatter characters are seen across the reels.

That’s when Troy Jokers is seen and he can double a user’s win up to three time during every single spin.

After the release of Minotauros slot, this is another slot machine that is an homage to Ancient Greece and it already looks like players are thrilled with it.

What is especially good about it is the fact that it was developed in a different style in comparison to their other games.

In the last couple of months, they have been very active and diligent when it comes to making games. Titles like Taboo and Voodoo have already gained a plethora of fans. We are not sure what’s next on the list but we are looking forward to seeing more from them.