Endorphina Goes on a Treasure Hunt in Troll Haven Slot 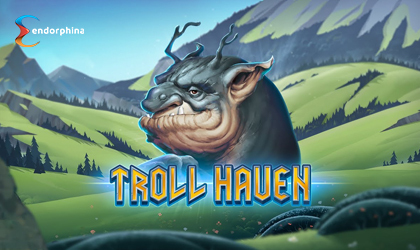 Built around a unique theme, this new game is packed with all kinds of potentially…

…lucrative features. Experience the beauty of the Scandinavian wilderness in this epic adventure that can potentially make your day!

The developer has used its latest slot game to give its fans a taste of the Nordics. This magical adventure takes place deep within the Scandinavian wilderness.

The team behind the title has used…

…the beautiful Nordic nature as the backdrop for this slot. Players will see rolling hills and mountains as they gaze past the reels. In an odd case that you’re not sure where you are, there’ a boulder at the lower left-hand corner of the background that contains Nordic runes.

Speaking of which, there’s much more of them on the reels than off the reels. Symbol design is truly impressive in this slot. The company has made Nordic runes a main part of their symbol design theme. As a result, even the lower-paying tier of symbols is packed with highly detailed iconography. These come in the form of card royals done up to look like runes. The higher paying tier is all about fish, fruits, and pots full of an unknown boiling substance.

The Troll and His Treasure:

As far as the base game goes, the release is rooted in the 5x3, 25 payline system that everyone’s used to by now. The game offers a number of special features that promise to spice up the player’s experience.

For starters, there’s the Troll Wild that acts as a standard substitute but also doubles any win if it lands on the reels. Then there’s the Bonus Spin mode that allows players to choose between 4 different modes, each bringing different features to the table.

Last but not least there’s the Risk Game feature that allows players to double wins up to 10 times. It’s essentially a well familiar ‘pick a card’ game, but one that can change the tide of one’s day given a bit of luck.

Endorphina is a slot game specialist dedicated to delivering innovation in the world of iGaming. Located in Prague, it has pledged to launch at least 12 games every year, making them one of the most active studios in the industry.

Founded in 2014, Endorphina is one of the younger studios in the industry. However, that didn’t stop this Czech team to become one of the leading slot game specialists on the market today. The company is constantly working on improving their games through innovation and better math models.