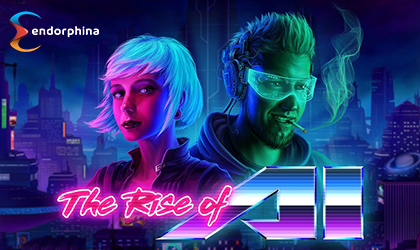 Endorphina has dropped its latest game, titled Rise of AI. This new slot features a very stylish representation of the future with its cyberpunk theme.

…the futuristic themes will fall in love with the visuals this game has to offer. On top of that, the developer is bringing potentially lucrative features to the table as well.

This latest slot game that is all about the cyberpunk, Blade Runner-esque vision of the future. The developing team went with heavy use of neon colors which gives this game a very specific look. The background offers a beautiful view of a major city at night. The scenery is flooded with neon signs written in Japanese.

…a massive part of this experience. The reels are black, offering plenty of contrast to what is happening on the reels. Symbols feature the lower-paying set comprised of heavily stylized card royals, and a higher paying set that features various characters.

The year is 2050 and the world is under the control of an AI. The game puts players at the mercy of this dark overlord who occasionally throws fortunes at his minions.

Players can try and grab some of those…

…riches on the reels. The 5x3 reel slot game runs on 10 fixed paylines. Although the base game is entertaining on its own, there are several special features that make the whole thing even more fun.

One of the most interesting things about this new release is the random multiplier. What makes it interesting is the fact that players might get up to x50 multipliers purely on random.

Next, there’s the risk game...

...that allows players to potentially double winnings up to 10 times. Interestingly enough, there’s no Bonus Spin mode in the game. Still, it feels more than entertaining enough in terms of win potential.

Endorphina is a software provider located in Prague that is specialized in making quality slots for the iGaming market. The company follows a very strict schedule of releasing at least 12 games a year. The team behind the brand takes great pride in the fact that everything they offer is created in-house. With a high standard of quality, this company is looking at becoming one of the favorite software providers in the business. Speaking of which, the company runs a fairly generous distribution network that includes a number of highly popular operators all over the world.