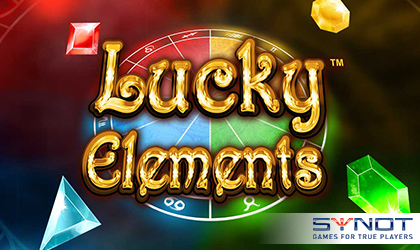 Sometimes, we all need some luck to attract and gain good things in life. With one of the latest video slots from Synot Games called, Lucky Elements, you just might enlarge your pocket.

First, let’s talk about some maybe less important (but still very relevant) aspects of this game – its appearance.

It may not be the best one we’ve ever seen, but the shiny, nicely-done symbols along with vivid and vibrant colors will surely boost your motivation during the gameplay.

What About The Rest?

We know that this part is the most exciting one for all those who are yearning to start this game. Namely, this slot is equipped with Wheel of Lucky Elements, a game that can be launched if you land at least three bonus icons.

Each Bonus you obtain is actually one life in this additional round. Moreover, these signs will double all values on the color-matching part of the wheel.

This slot machine comes with five reels and lots of opportunities to gain some superb prizes!

The end of the last year was quite exciting for this corporation. Namely, at the end of December they made a partnership with developer, GAN.

They are one of the largest providers of enterprise-level B2B Internet gaming software, online gaming content and other form of services regarding this industry.

Furthermore, GAN is one of the biggest names in the United States with a contract value in excess of around $500,000!

What Does The Contract Say?

Viz, this company is going to export six of SYNOT’s top-notch casino games, including one of the premium ones, called, Alchemist’s Gold to the United States via GAN’s GameSTACK which represents the Internet Gambling Platform.

This agreement is made to benefit both parties hence, it includes fees for development as well as ongoing revenue-share participation.

By the end of this year, all games are going to be released and completely functional and will be launched as Real Money Gaming and Simulated Gaming titles. Dermot Smurtfit, CEO of GAN gave his statement regarding this dealership and said:

“We are excited to begin working with SYNOT and look forward to bringing their successful European slot titles to select US markets. The deal solidifies GAN’s US market position as a viable route for international and domestic gaming companies to gain immediate access to the new and fast-growing regulated US online gaming market. We expect full US-integration of all 6 SYNOT titles to be completed by the end of 2019 and expect material impacts to GAN’s 2019 EBITDA and revenue in the same period.”