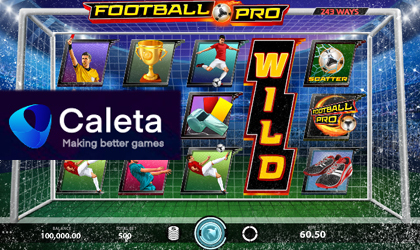 Caleta Games has announced the launch of Watford FC Football Pro slot in cooperation with Sportsbet.io. This is actually a revamp of…

…their highly popular Football Pro slot that has brought this company a lot of success in the past.

Watford as the Main Prize:

This slot brings a similar design and aesthetic to the original, with a few important updates. It is a 5x3 reel slot, with progressive multipliers. Since the game was developed in cooperation with Sportsbet.io…

…players will take part in a special mini-game. Namely, Sportsbet has agreed to award one lucky player with the Warford FC jersey.

In order to qualify, players will have to trigger five special symbols that come in the form of yellow branded football jerseys.

On top of that, there is another competition going on in the background. The objective of the competition is to get the most points in the game. The player that ends up with the highest score by August 7th will hit the jackpot! They will be flown to London where they will get to watch Watford Hornets take on Arsenal FC on September 15th.

The next three highest-scoring players will get a football each that was signed by the entire Watford team. These prizes have caused a lot of hype already and are promising to draw in football fans from all over.

Both Caleta Gaming and Sportsbet.io representatives have commented on the new release.

David Marcus, CEO at Caleta Gaming, stated the following: “Sportsbet.io’s partnership with Watford FC was a landmark deal in the world of sports sponsorship, and we wanted to celebrate with an exclusive slot and some fantastic Watford-related prizes. Football Pro captures the excitement and intensity of the beautiful game, so it made perfect sense for us to reward Sportsbet.io players with the chance to experience the best of Premier League football.”

Joe McCallium, Director of Sportsbook at Sportsbet.io, also said: “Just weeks after the announcement of our partnership with Watford, we wanted to put our players at the heart of the action, and what better way than an exclusive game and the chance to win a once-in-a-lifetime trip to a Premier League match. Launching Football Pro powered by Sportsbet.io underlines our commitment to fun, fast and fair gaming that puts our customers first, and for us that is always the goal.”

The Football Pro slot and contests are still running and are available at all partnered online casinos.

The content development company services the online casino niche. This team of dedicated professionals offers premium gaming solutions on both mobile and online platforms. Their entire line of software is based on their in-house technologies that allow for cross-platform utilization and integration.

It currently offers one of the most diverse and unique portfolios available on the market. With the motto ‘Making better games,’ this company is staying true to its original mission. This latest project shows just how flexible the company is.