Build a Spaceship and Go Exploring in Rocket Stars from Evoplay 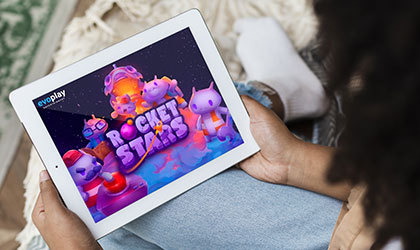 Evoplay Entertainment has announced the release of Rocket Stars, a brand-new slot game that is bringing a fun theme followed by a number of interesting features.

…somewhat unusual slots will absolutely appreciate where this game is going in terms of visuals and audio.

Reach the Stars and Mighty Bonuses:

The developer decided to depart the terrestrial realm and look for the riches among the stars! Your job is to put together the ship and actually get underway.

The new title is an…

…exciting new slot game that gives this entire genre a brand-new perspective. The theme is so far removed from what you’d usually see in this one-armed bandit game. With a background depicting a shipyard where workers are tirelessly putting together a rocket ship, the title is one of the more animated games to hit the market this year.

There’s always something going on behind the reels, making the game super entertaining no matter what. Symbol design is very much unique as well.

Instead of going with the usual…

…card royals, the team behind this slot game has turned to different colored gems. On the higher paying side of the symbol design, we see astronaut gear such as helmets, boots, and other stuff.

One of the most surprising aspects of the game is sound design. The soundtrack is quirky, fun, and somewhat unusual. However, it fits perfectly with the game. Intergalactic

The 5x3 slot game runs on 20 paylines and is stacked with awesome features. For starters, you’re looking at the Rocket Building feature. Every time you collect a scatter symbol, your workers will add a new part to the spaceship.

Collect all of the parts and enter the Bonus Spin mode. Next up is the Star Gates feature where 5 or 6 Star Gates symbols land on the reels and cover symbols. One the feature is activated, the gates will open and you’ll get either regular symbols or scatter symbols.

Lastly, there is the Space Gate. A 3x3 Space Gate will drop on the reveal either regular symbols or scatters.

Evoplay is an innovative slot game developer that is specialized in integrating advanced 3D graphics and VR technologies into this niche. The company is currently working with some of the leading operators around the world and is pushing the limits of immersion. It is a relatively young company that is still making a name for itself in the industry. With a very talented team at its helm, it is arguable that Evoplay is going to achieve stardom.