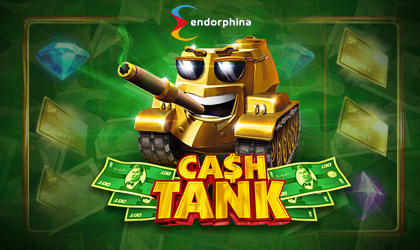 Endorphina, a rising software studio based in Prague, has just released a new slot game titled Cash Tank. Featuring a unique theme and a thrilling set of features…

…this newly released slot promises to become a crowd favorite by the end of the year. The developer has started off 2020 with a bang, and this slot is only continuing that trend.

This latest slot is all about winning big. The entire theme of this game is based around that premise. Fans of simple slots will appreciate the lack of overbearing visuals as the game brings a static background.

As one would expect from a game that has the word “cash” in the title, money is the main motif. The background we’ve just mentioned depicts bills stacked one on top of the other.

One quick glance at the reels reveals more of the same. The devloper went all out when it comes to making money the focus of this slot. Symbols are divided into two tiers as expected. The lower tier is comprised of various gems, while the higher paying…

…tier features unique symbols. These include golden credit cards, stacks of cash, bags of gold bars and finally a golden dollar sign. Interestingly enough, there’s no soundtrack in this game, but players do get a money counter sound effect whenever they click the spin button.

The title features a 5x3 reel grid and runs on 10 paylines. The base game is smooth and sufficiently exciting with its wild and scatter mechanics. However, there are several special features for those…

…who need a more thrilling ride. There’s the expanding wild feature where the Cash Tank Wild appears on reels 2,3 and 4. Once it lands, it can expand over the entire reel and trigger a bonus spin mode with 3 spins.

The real star of the show is the Risk Game where players get to choose one of four available cards on the table. If their card is higher than that of the dealer, they will double their stake. Players can double their wins up to 10 times this way.

Endorphina is a software provider based in Prague whose main goal is to deliver high quality, innovative slot games to the iGaming industry. Founded in 2014, this company has been working…

…hard to make a name for itself on the market. With a pledge to release at least 12 games per year, it is one of the more active software providers out there.

The team driving the brand forward consists of professionals in various fields, who live and breathe iGaming.