Booongo to Launch Sun of Egypt 2 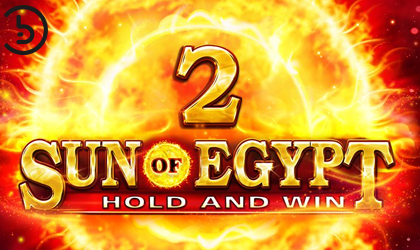 A year after the release of the first game, Booongo is already preparing an upgrade of the previous version with its new Egyptian-themed Sun of Egypt 2, which will be released later in 2020. It will include a hold and win feature, which is also available on the original Sun of Egypt slot.

These days, it is becoming easier and easier to find slots with this feature. In the game, players will travel through the sands in search of epic victories in a dynamic Egyptian adventure slot.

Having popular features from the original hit such as Hold and Win, the game now offers four jackpots that players can win. The Grand Jackpot is worth 5,000x the bet, when the reels are filled with sun symbols. The bonus game has a Mystery Sun, which appears at the end of the respin mode as large, minor or mini symbols, paying out 150, 50, and 20x the player's bets to greatly grow the winnings. The game surely has improved graphics to make the game more interesting and exciting to new punters and fans of the original, and the title is available on all devices thanks to developers and using the HTML5 technology.

“Our portfolio has a number of fan favourites, and with Sun of Egypt 2, we have ramped up the gameplay of the original slot to a whole new level. With a lucrative respins round, artfully created slot surroundings and an immersive soundtrack, players will be searching the desert far and wide for life changing wins in our latest hit.”

The group of operators began to recognize Booongo as soon as they saw what its platform offers. It was founded in 2015 and has headquarters in Ukraine and Taiwan where it has been building and earning a reputation since the start. After receiving a gaming license from Curacao, the brand has made lucrative deals with many online gaming centers and has exhibited its games under the trusted guidance of trusted operators.

The developer has an extraordinarily skilled development team that pays close attention to every detail and its talent and passion is evident in its products. The brand pays special attention to the graphics and visual effects of its products and openly shows the mathematical model of its games.

It has worked hard to implement video slots that often go over the edge and deliver attractive options to what is expected today. The creators and developers are not afraid to experiment and suggest something new on the market.