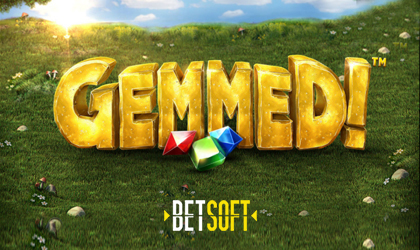 Betsoft, one of the leading software providers in the iGaming industry, has released a new slot that takes players on a thrilling journey to paved with gems. Appropriately titled Gemmed!, this game offers…

…a number of highly interesting features to players who are into more volatile slots.

This recent title from Betsoft is a game that was built around its features rather than its graphics. With that said, the studio behind this release has left nothing to chance when it came to the visuals.

Players are presented with a tranquil and soothing forest scenery that serves as a perfect counter to the chaos that goes on the reels. Symbol design was one of the more important aspects of this game for sure.

The creators didn’t want to overcrowd the reels with symbols that were too flashy, but they didn’t want to oversimplify things either. This slot comes with a fairly immersive background that sells the whole idea of a treasure hidden deep in the unknown parts of a massive forest.

What really makes this game offering stand out compared to most others out there is its base mechanic. This is no ordinary slot game. Instead of running a fairly classic 5x3 grid, this game features dynamic reels that run on a staggering 40,503 ways to win system! In other words, the reels on this game look chaotic. However, combined with the shiny symbols of higher-paying icons, the whole thing looks positively overwhelming.

As far as special features go, this one comes with the usual, but highly respected feature that the brand likes to add to many of its games.

We are of course talking about the Double Up mini-game. Those not familiar with this feature will get a crash course in coin flipping the moment they decide to test it out. Best of all, the Double Up game allows players to bet only half of their win. This opens plenty of room for a strategy that could potentially bring lucrative prizes to players.

Annamaria Anastasi, the developer’s Marketing Director, commented on the release: “Gemmed! is a fantastic new addition to our ever-growing slot portfolio with packed reels and stacked full of high potential wins. With a huge amount of paylines and captivating gameplay, Gemmed! encompasses all that’s great about Betsoft titles. We can’t wait to see how it performs.”

Betsoft is one of the premier providers of high-quality slots and other gaming content in the iGaming industry. The company traces its roots back to 2006 when it was founded by a small team of talented individuals. Since then, it has grown into a proper authority that is known for their 3D slots, as well as complete background content management solutions.

Such business practices and steep rise to fame has brought this brand partnership deals with some of the top operators in Europe and elsewhere.