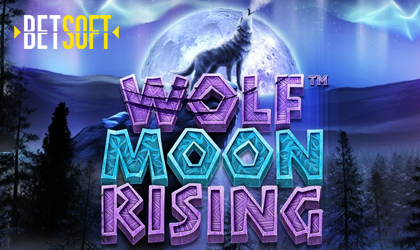 BetSoft has announced the release of its latest slot game titled, Wolf Moon Rising. Players will be introduced to a beautiful landscape and more importantly…

… a set of potentially rewarding features. This game is the latest in line of promising releases from this company.

The latest title from BetSoft puts players in a mythical landscape where snow-covered mountains give a dim contrast to the aurora borealis that riddles the skies. This environment ruled by wolves and other wild animals sets the mood for a magical gaming experience.

The theme of this slot is designed in a way that emphasizes the call of the wild. Players’ view beyond the reels expands into a massive valley that runs into a mountain range out in the distance. It’s night time and aurora borealis lingers in the skies, illuminating the snow-covered tops of those faraway peaks.

In contrast to that, the foreground is home of a simple yet adequate frame. Made to look like a part of an ancient temple, perhaps a shrine of sorts, the reels fit the overall theme perfectly.

With that said, symbol design is what ties in the whole game together. The supplier went with the standard card royals as their lower value stack, while the higher value stack comes in the form of various wild animals. Players will see wolves, bobcats, mountain lions, and others.

It is also worth mentioning that this game features interesting visual effects that are triggered by spinning a winning combo on the reels.

What’s underneath all of the visuals is fairly interesting as well. The developer went with a 5x3 grid that runs on 25 fixed paylines.

The team behind the game has decided to spice things up with a Bonus symbol that can carry x3, x4 or x5 multipliers. The real fun starts when players hit a winning combo and the Double Up feature opens up.

This is the game’s main special feature. One in Double Up mode, players will be presented with a standard coin toss game. However, this is not an all or nothing mini-game. Instead, players can choose to bet only half of the amount. This option greatly improves one’s chances of winning big.

The brand has used this feature in its previous games such as the Gold Canyon and others.

The company has officially released the title, making it available in all affiliated online casinos.

BetSoft is one of the premier producers of online casino content. With over a decade of experience, this company has proven to be more than capable of designing, creating and supporting high-end games as well as other software. Specialized in 3D cinematic slot games, it has been working hard on increasing player acquisition and retention via quality visuals.

Such dedication to end-user satisfaction and high standards of quality control have brought them a number of rewards from EGT as well as G2E Asia and other significant institutions.

More importantly, they have gathered a massive portfolio of clients, including several top tier operators.