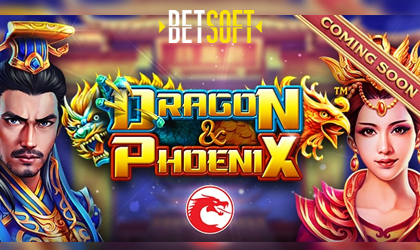 Betsoft, a slot game provider, specialized in delivering high end slots, has announced a future release of a new slot game titled Dragon and Phoenix. Settled in the ancient Far East, this slot…

…takes players on a magic adventure full of all kinds of interesting features. On top of that, the game packs solid core mechanics that promise to bring potentially strong wins.

Mysteries of the Far East:

The developer decided to treat players who appreciate the traditional Chinese theme. The title takes things even further by adding a literal representation of these mythical creatures – something that not many slots of this genre do. The visual experience offered will make fans of the genre feel at home. The entire background is covered with…

…details from traditional Chinese architecture while the legendary cherry blossom tree is an unavoidable part of the equation. This type of design translates to the reels as well. Symbols offered come in form of the standard card royals for the lower paying set, while the higher paying set includes various pieces of jewelry, depictions of dragons as well as orbs sitting comfortably in a dragon’s grasp.

Underneath all of that flashy exterior lies a core game that features 5 reels and 3 rows. This game runs on 20 paylines, making it a fairly tame experience. Those who want a more thrilling ride can…

…find it within the offered special features. The game comes with expanding wilds that can extend to cover the entire reel. On top of that, players can activate the bonus spin mode when 3 or more scatter symbols appear on the reels.

The most promising feature is the Double or Nothing mini game. Over time, this feature has become a trademark part of the developer’s slots. It works by allowing players to double their win in a simple game of coin toss. However, the main difference between its coin toss game and those other providers offer, is in the available options.

Namely, players can choose if they want to gamble the entire amount or only half. By having such an option, players can approach the coin toss game more tactically, since it’s no longer an all or nothing situation.

The game will be made available on December 3rd to the supplier’s network of affiliated online casinos.

Founded in 2006, Betsoft has quickly rose through the ranks and become one of the trusted sources of quality iGaming content. The company is specialized in delivering cinematic slots as well as slots that bring more advanced features to the table. Their dedication to customer satisfaction has brought them all kinds of awards while they have also built a massive distribution network that includes some of the most popular…

…operators in the business. It also offers a whole suite of tools designed to help operators manage their content.