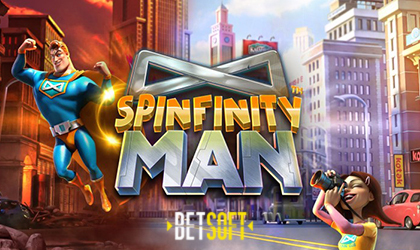 There are a lot of blockbusters in the film industry but don’t be surprised if you come across one that is coming straight from the gaming industry. In fact, you’ll see just that in the latest slot developed by creative supplier, BetSoft Gaming.

What’s So Inviting About It?

It’s titled, Spinfinity Man, and it is perfect for gamers who are big on action-packed slots, plus, if it revolves around superheroes – you can’t get any better than that! This game is all about having fun, exploring features while on a journey with Spinfinity Man, himself.

This dynamic reel slot comes with 7x7 cluster grid and players can grab up to 5000x, meaning, there are numerous reasons to start playing this game instantly!

When we said that the main character is a superhero, we meant a REAL ONE, with out-of-this-world superpowers. He is so almighty, that with his help, consumers can shower themselves with phenomenal wins and not just that…

…but he is also so omnipotent that he can fight against his enemies without having any problems. His biggest nemesis is Mr. X. If players manage to catch him, they will enhance their chances of triggering more outstanding wins during bonus rounds!

This game gives players no room to rest. It abounds with action and numerous tasks. One of the most crucial ones is to save the city and BetSoft definitely didn’t make things easy. As soon as users launch the game, they will find themselves at home. They must instantly destroy at least four clusters of icons of different values to be able to further enjoy this story.

Furthermore, they will come across numerous exciting cluster combinations that will further be upgraded by virtue of our favorite superhero. Whatever characters do in this slot, it will always be noticed, and often captured by camera.

That means the more time spent playing, the greater chances their fans will do anything in their power to take a picture of their favorites. Once they click the camera, a group of symbols will explode and activate an instant cascade.

Watch Out For Mr. X!

Remember him? This evil-doer is unstoppable! He is incessantly roaming around looking for trouble and players must find him ten times by activating the icon during a cascade. Once this occurs, they will enter the exciting bonus round!

Our resourceful hero will try to find his biggest enemy with a goal to fight against him because Mr. X has his arsenal of power. During this round, each 2x2 animated icon will be replaced by one of Mr. X’s signature tricks and possibly trigger one of the biggest fights in the world during which gamers can earn up to 5000x time their bet!

Generally speaking, this game seems like a never-ending dynamic story. Let’s see what Annamaria Anastasi, Marketing Director has to say about it:

“Spinfinity Man is a fun, frivolous, feature-packed game built to capitalise on the huge appetite for superhero stories.

Each aspect of the title, from its outstanding character designs to its cinematic gameplay, has been carefully calibrated to attract and engage players.”