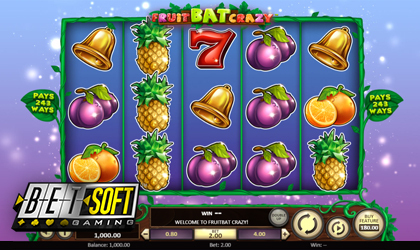 Cold days are behind us and it’s time to welcome the ones that are sunnier and more cheerful. The best way to do it is to freshen up with a brand-new video slot machine called, Fruit Bat Crazy.

What Do We Know About It?

BetSoft wanted to brighten up our day with their own version of classic cascading reels by enabling players to create their own yummy combinations before smashing them in a single, mellow splat.

Serious gamers will have to be very patient at first, because in the beginning they will instantly stumble upon those low-paying characters and once that occurs, icons will fall on a combo-by-combo basis.

This means that smaller wins will activate their own cascades before the larger ones are counted. Ultimately, this could potentially give players a chance of getting more tasty Fruit.

Meet Other Quirky Habitants on the Reels:

If you think that there’s only one silly creature in this game, well, then you’re seriously wrong. Namely, users will come across an entire flock if they land more than three characters at the same time across the reels.

They will step down from the trees and gorge themselves over at least ten additional falls. One of the good things about this game is that it offers a variety of interesting things.

For instance, gamers can purchase as many free falls as they wish to at any point and plus, the reels come with a special coin sign that tracks across play sessions and can cut the buy-in cost to zero if enough are accrued over time.

“With Fruit Bat Crazy, our objective was to bring the unmistakeable Betsoft touch to what looks, on the surface, like a traditional slot game.

From its loveable central character and exaggerated artwork to its innovative approach to combinations and cascades, Fruit Bat Crazy is an all-new experience that will excite and engage both new audiences and seasoned players.”

Its recent Yak, Yeti & Roll title was announced this winter, and with this one spring has officially sprung.

It was developed in their single-core, cross-platform SHIFT development environment. Soon, players will be able to utilize SHIFT 2.0, on their mobile phones and computers. With it, they will be able to experience the exact same gameplay.

Furthermore, this innovation will provide them with a superb sound, intelligent asset and plenty of other options.