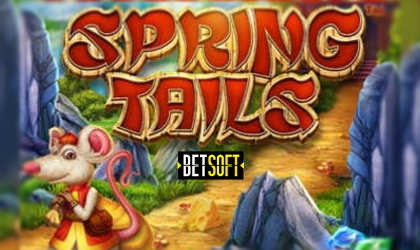 …brings bombastic features that could potentially bring massive wins. On top of that, fans of traditional Chinese themes will get a real treat with this game.

The Year of the Rat:

This latest slot game comes bearing many gifts. Created to celebrate the Chinese New Year, it features everything you would expect from such a game. Players who like easy-going traditional Chinese themes will absolutely love this game as it offers great aesthetics.

The scenery sets the location of the game at the edge of a lush, green valley. With only a few buildings sporadically scattered across the screen, this title isn’t too aggressive in terms of graphics.

With that said, the background is partially animated. The team behind this release made a special layer of low flying clouds that gives the whole game some depth. Other than that, you’ll also see a little rat sitting at the bottom of the reels and carefully observing your actions.

Symbol design goes in line with what the game is all about. The supplier has defaulted to using the card royals as the lower-paying set while the higher paying set is reserved for bags of rice, cheese, nuts and golden teapots. Overall, the whole theme is exactly as one would expect it to be considering the title and the inspiration behind this slot.

Off the Charts Features:

Celebrating the new year is all about good luck and winning potentially massive fortunes, and that’s exactly what this title brings to the table. It is a 5x3 slot that runs on 5 fixed paylines and brings several interesting features.

For starters, there are the Multiplier Wilds that can bring 3x, 4x or even 5x the initial bet. The real treat is the Golden Key feature. Golden Keys can appear anywhere on the reels and trigger a bonus spin mode with 12 extra spins.

All of the lower-paying symbols are removed in this mode, opening a chance for players to win a jackpot ranging up to 300364x the original bet!

Annamaria Anastasi, Betsoft Marketing Director, said: “We are delighted to have scheduled the release of Spring Tails in time for Chinese New Year. The Red Dragon series has been fantastically well received by our players and operators alike and our commitment to cinematic quality, new concepts and to giving our players huge pay-out potential is what keeps us at the forefront of this very demanding and dynamic market.”

Betsoft is one of the leading software providers in the iGaming industry. The company is known for its immersive slots that often bring original themes and features to the table. With a global reach, this provider is responsible for some of the most played games in the market.