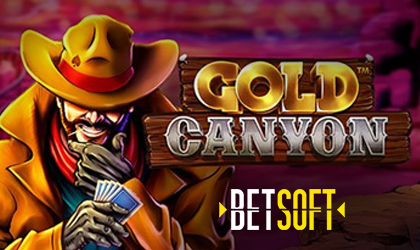 Betsoft has released a new title that takes place in the Wild West. Named Gold Canyon, the game promises a thrilling adventure to those who brave enough to partake. Just like in the olden times, there is a lot on the line as the game features potentially high winnings and other attractive features.

The release comes at the heels of the developer’s successful run at EGR B2B this year, which has only drawn more eyes to towards this studio.

The Gold rush of the old West is a well-known story. Many risked all they had just to have a shot at finding that strain of gold up in the mountains of Sierra Nevada. The brand’s slot game doesn’t promise the same fortunes, but it doesn’t incur the same risks either. Instead, it takes the player on a thrilling ride out in the gold country.

The base game and special features are the real gems. The studio behind the title went creative with Hero Wilds that expand over an entire reel, TNT stacks and scatter pays. At its core, this is still a 5x3 game, which will definitely appeal to those who appreciate the more traditional gaming experience.

Annamaria Anastasi, Marketing Director at Betsoft Gaming, came out with a statement regarding the new release: “Gold Canyon is a classic slot, packed full of unique Betsoft features, bonus rounds, and free spins that players are sure to love and keep coming back to. The release comes just a few weeks after our “Innovation in RNG Casino” award at the EGR B2B gala evening. We’re really excited for what the rest of 2019 has in store with even more fantastic titles to come!”

The new game will be available at all of the brand’s partnered online casinos.

On a Winning Streak:

Gold Canyon’s release was somewhat overshadowed by the supplier’s performance at EGR B2B several weeks prior. The company was recognized at this event with a prestigious ‘Innovation in RNG Casino’ award. This has, in turn, placed a spotlight on them, which is bound to bring them more positive attention.

The game itself is not the only thing that the studio is trying to promote these days. Their latest and back-end administration system is also seeing a lot of attention. The company claims that this cutting-edge administrative tool has the power to completely change the way operators govern their portfolio.

Betsoft is currently one of the leading suppliers and software creators on the market. This company is best known for its cinematic solutions, which has helped them establish fruitful relationships with over 200 acclaimed online casinos all over the world.

The RNG lineup from this company with its 190 games, represents a large part of their recipe for success. It is headquartered in Malta where they are also licensed. With that said, you can find their titles in 15 other regulated markets around the world.