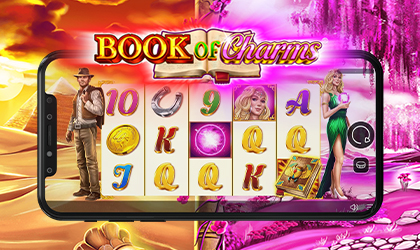 The allure of ancient treasure is hard to resist, and with huge potential payouts available in both the main game and the bonus features, players are sure to be charmed by Book of Charms. This new slot from Realistic Games offers excitement and intrigue around every turn, making it a must-play for any casino fan.

Featuring 5 reels and 3 rows, the charming title offers 10 paylines. With a minimum bet of just $0.1 and a maximum bet of $5, this game is not expensive to play. The game also boasts an RTP of 96.38%, while the volatility is high! And with a maximum payout of 20000x the bet, there are some serious rewards up for grabs!

Commercial Director of Realistic Games, Robert Lee added: “We’ve had Book of Charms in development for some time and ever since the concept was first devised, it has been a game we are very confident in. By offering a game with two exciting bonus rounds and blending them into one, we’ve created something that offers the kind of win potential that is largely unrivaled.”

More than 20 Years of Experience:

Realistic Games is a well-known casino software developer that has been in the casino industry for nearly 20 years. In 2002, when the company was founded, it has been recognized for developing entertaining online casino games around the world. Some of the largest casino brands in the UK and other parts of the world have started its content on their platforms. At first, the supplier focused on creating a small collection of games for its clients. In 2008, the group significantly expanded its presence and gaming lobby. Some of the most popular games developed by this company are Rainbow Magic, Clockwork Mice, Symmetry, Black Ice and others. The brand has won multiple awards in recent years for their innovative and exciting casino games. In 2019, it was awarded the Game of the Year prize at the EGR B2B Awards for its game: Cash Buster Towers. This was a big win for the company and showed that its games are loved by both players and critics alike.