A Criminally Good Slot By NetEnt To Go Live In May 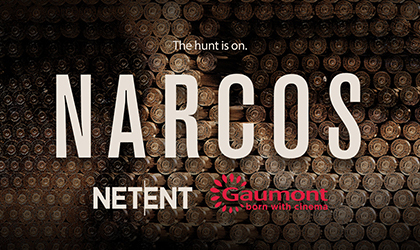 The title says it all; it’s clear to us that this game is no joke, meaning that it consists of girded and dangerous people that live in a world where everything revolves around money, crime and drugs.

We all know that Colombia is one of the most dangerous countries in the world when it comes to precisely this topic, hence, you know what to expect when you launch it.

Creative software developer, NetEnt, has designed an action-packed game where players will gain insight into the underworld of this country. Also, plan to catch a glimpse of Pablo Escobar, notorious Colombian drug lord.

It’s all in good fun, however, and while the theme is serious in nature, the potential for wins sets the tone for an exciting experience.

Also, What Can We Look Forward To?

Before we go directly to its features, let’s get to know the basics. Firstly, this is a slot that is equipped with five reels, three rows and 243 bet ways and represents a virtual version of one of the most popular Netflix series, with the same name.

It will keep players focused with interesting features such as Walking Wilds, which stay on the reels while gamers are winning and, at the same time, move one place to the left with every single spin.

The second one is titled the Drive-by feature and it is inserted here to turn some of the most valuable characters into wild icons.

And last, but not least – the Locked Up feature. Once triggered, it bestows a random coin win. If one Golden Locked Up sign is seen across the reels, it will allow players to unlock more sensational features.

Moreover, if they land at least three scatter symbols anywhere on reels 1, 3 and 5, they will receive ten casino spins!

As you can see, this really looks like an entertaining game. It is evident that NetEnt has “a thing” for popular TV shows or movies, since this isn’t their only video slot based on either.

Last year, they launched a reel slot, called Jumanji, an homage to the film of the same name.

Suppliers in this industry are always trying to find a way to sweep their consumers off their feet by adding something fresh and new to their portfolio.

Sometimes, branding is the crucial change that needs to be made. Not too long ago, they showed their will and ambition by unveiling two sensational offers and CEO, Therese Hillman, provided the details.

She talked about their two video slots – Conan the Barbarian and Ozzy Osbourne. They secured rights for the first one and they’ve produced the second game.

Hillman said that it’s not so easy to find new brands for their games and that it really takes some time to do it, before adding the following words on Jumanji and Planet of the Apes slots:

“And we can do our own twists with their brand and they work with us. So it has to fit. So we’re always looking for brands that fit, both with the slot games but also with NetEnt.”