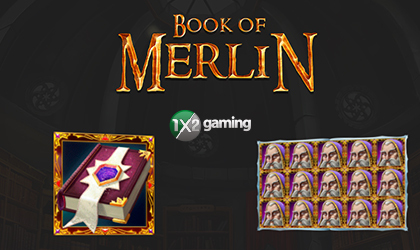 1x2 Gaming has announced that they will soon be releasing a new slot game titled, Book of Merlin. Centered around one of the most popular legends in the world, this slot promises an interesting gaming experience.

The new title is said to be packed with all kinds of great features, all while offering what arguably going to be great graphics.

The developer has announced the release of a new game that follows the life and work of Merlin – one of the most legendary wizards to ever grace the world’s literature. With an obvious focus on Magic and wizardry, this slot...

…offers an appropriate theme that is packed with high quality graphics. As the game loads up, players are taken to a sunlit chamber that represents the Wizard’s lab. The entire scene is full of obvious magical elements, letting the players…

…know exactly where they’re at. One glance around the room reveals an abundance of books and various magical items such as skulls.

A closer inspection reveals that some of the books are floating, which also goes for the chandelier and a few candles. At the bottom left corner of the screen, there’s a floating quill writing something down into an open notebook.

As far as symbols go, the brand has decided to stick with the proven layout for the most part. The lower paying symbols depict various card royals in a stylish way that works with the overall theme. The higher paying symbols on the other hand, come in the form of various potions, wizard staffs and more.

A Well-Known Base Game Experience:

Underneath the cool aesthetics lies a proven core game that we’ve seen numerous times by now. This slot runs on a 5x3 reel grid and 10 fixed paylines, featuring an estimated RTP of 96%. Although quite familiar, this type…

…of setup has proven to be attractive to both casual players as well as those seeking a thrilling ride. 1x2 has added several special features to spice things up even further. Players can expect to see expanding symbols, bonus spin modes and the usual scatter/wild mechanic.

Overall the game looks promising and will be available to online casino operators sometime by the end of January 2020.

1x2 Gaming is a software provider and a part of the 1x2 Network – one of the larger software providers currently operating in the iGaming industry. The company offers a wide range of slot games, including a variety of cinematic releases.

Founded back in 2002 in the UK, it takes great pride in remaining an independent entity. With full creative freedom to design and produce gaming software how they want, this company has grown quite a fan base over the years, especially in its home country.