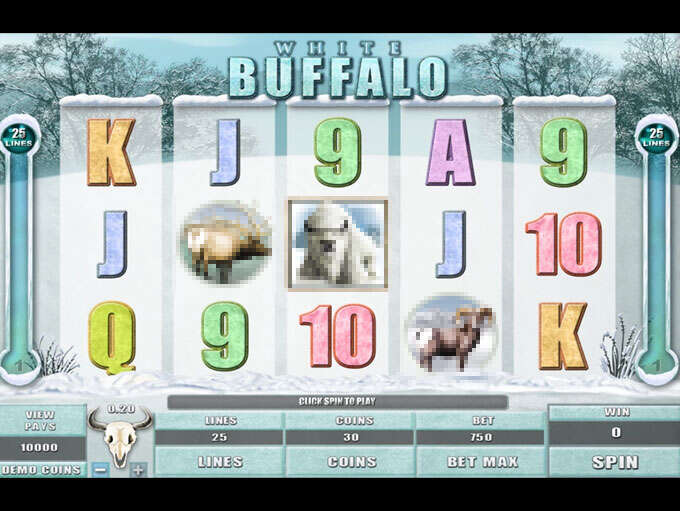 Microgaming has come up with another exotic locale for one of their slot games. Not only is the setting unique, but the symbols are quite distinctive as well. The backdrop may be exotic, but that doesn't mean the game is on a tropical island or a vacation destination. It's the very frigid northern setting of the American Plains, where the White Buffalo and other hearty creatures roam over the snow-covered landscape.

The game board of White Buffalo gives you the feeling of extreme winter. White-out conditions prevail over the terrain, along with shades of icy blue. To the side of the reels, there are the columns that show you the number of lines you have in play and they are made to resemble thermometers. The only odd touch to the game is the music. It sounds like something you'd hear in an ancient Asian kingdom, not in the great white north.

The symbols of the game are primarily the large animals of the region, including a Ram, a Moose and an Elk. The White Buffalo operates as the game's Wild symbol. When he appears, you can see him snorting out the cold air. There is also a National Park icon, which functions as the Scatter symbol.

The National Park Logo and the White Buffalo are not only the Scatter and Wild symbols in the game, they are also the best paying symbols. If you can get five of either one on a line, you'll win 1,000x your bet. But your best chance to get a big payoff in White Buffalo Slots comes when you win free spins.

When you get at least three of the Scatter symbols on one line,  you'll receive six free spins and they can be re-triggered. There is a very special feature offered during those spins. All  of the Animal symbols on the reels turn into the White Buffalo and become Wild which, of course, greatly increases your chances of winning.

Currenty there are no reviews for White Buffalo. Be the first one who will review it.