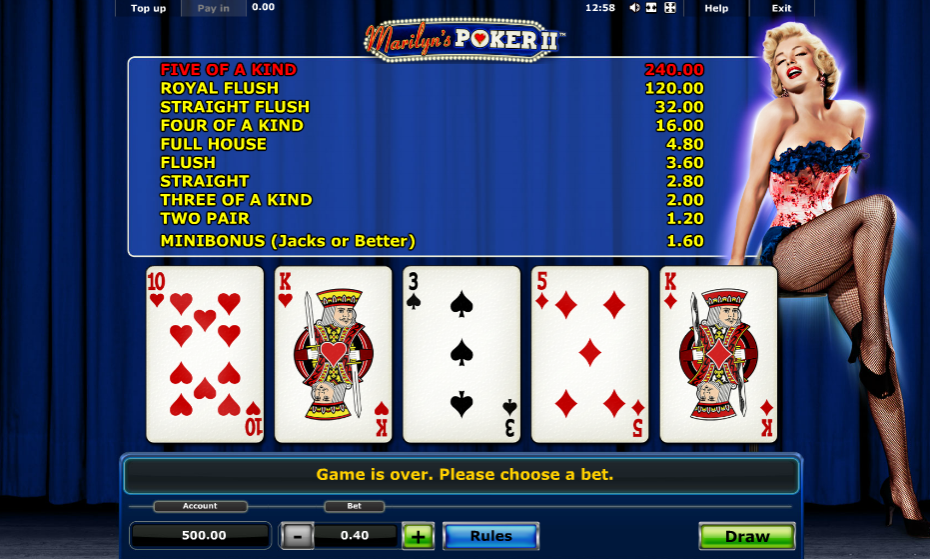 Marilyn poker II is a variant of poker developed by casino software supremo, Novomatic. The game is a follow up on American Poker II, a popular variant of poker also created by Novomatic. Although American poker II gained popularity for its simplicity, it was criticised for overly simplistic design. Marilyn poker II seem to be an attempt by gaming software heavyweight to make course corrections. This fact is evident in that the two are basically the same game except for the fact that the issue that attracted criticism to the American Poker II has been attended to in Marilyn poker II. The game features a standard deck which consists of fifty-two cards and a joker which performs the function of the wild card in the game. The pay-outs in the game are for traditional poker combinations, ranging from two pair to a royal flush. The game also allows you the luxury of changing up to five cards.

Gaming action begins after you have placed your wager. To commence play, you’d have to choose the size of your wager (between forty and one thousand coins). After placing your bets, you will be dealt five cards. Next you have to choose which cards to hold or swap once the cards have been turned over. You can do this by simply tapping or clicking the cards. At the end of a session, wins are announced and pay-outs are made. The most valuable hand in the game is five of a kind. Marilyn poker comes with a wild card system which makes five of a kind hand wins possible. The next valuable hand in the game is a royal flush.

The highest pay-outs in the game is for five of a kind (which comes with a pay-out of 600:1). Once pay-outs have been paid, the player can decide to keep it or wager it using the gambling feature. If you decide to use the gamble feature, you will be ushered into a colour guessing game where you stake your winnings on the probability of your guess. Guess right and you win more. Guess wrongly and you lose your wins.

Currenty there are no reviews for Marilyn's Poker Ii. Be the first one who will review it.

This game has not been rated yet.

Be the first to rate it!